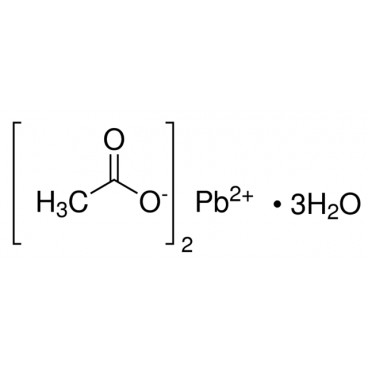 Lead(II) acetate (Pb(CH3COO)2), also known as lead acetate, lead diacetate, plumbous acetate, sugar of lead, lead sugar, salt of Saturn, or Goulard's powder, is a white crystalline chemical compound with a sweetish taste. It is made by treating lead(II) oxide with acetic acid. Like other lead compounds, it is toxic. Lead acetate is soluble in water and glycerin. With water it forms the trihydrate, Pb(CH3COO)2·3H2O, a colourless or white efflorescent monoclinic crystalline substance.

The substance is used as a reagent to make other lead compounds and as a fixative for some dyes. In low concentrations, it is the principal active ingredient in progressive types of hair colouring dyes. Lead(II) acetate is also used as a mordant in textile printing and dyeing, and as a drier in paints and varnishes. It was historically used as a sweetener and for cosmetics.

Like other lead(II) salts, lead(II) acetate has a sweet taste, which led to its historical use as a sugar substitute. The ancient Romans, who had few sweeteners besides honey, would boil must (grape juice) in lead pots to produce a reduced sugar syrup called defrutum, concentrated again into sapa. This syrup was used to sweeten wine and to sweeten and preserve fruit. It is possible that lead(II) acetate or other lead compounds leaching into the syrup might have caused lead poisoning in those who consumed it. Lead acetate is no longer used in the production of sweeteners because of its recognized toxicity. Modern chemistry can easily detect it, which has almost completely stopped the illegal use that continued decades after legal use as a sweetener was banned. Lead(II) acetate, as well as white lead, has been used in cosmetics throughout history. Lead(II) acetate paper is used to detect the poisonous gas hydrogen sulfide. The gas reacts with lead(II) acetate on the moistened test paper to form a grey precipitate of lead(II) sulfide.

An aqueous solution of lead(II) acetate is the byproduct of the 50/50 mixture of hydrogen peroxide and white vinegar used in the cleaning and maintenance of stainless steel firearm suppressors (silencers) and compensators. The solution is agitated by the bubbling action of the hydrogen peroxide, and the main reaction is the dissolution of lead deposits within the suppressor by the acetic acid, which forms lead acetate. Because of its high toxicity, this chemical solution must be appropriately disposed by a chemical processing facility or hazardous materials centre. Alternatively, the solution may be reacted with sulfuric acid to precipitate nearly insoluble lead(II) sulfate. The solid may then be removed by mechanical filtration and is safer to dispose of than aqueous lead acetate.

It was also used in making of slow matches during the Middle Ages. It was made by mixing natural form of lead(II) oxide called litharge and vinegar. Sugar of lead was a recommended agent added to linseed oil during heating to produce "boiled" linseed oil, the lead and heat acting to cause the oil to cure faster than raw linseed oil.

25 other products in the same category: