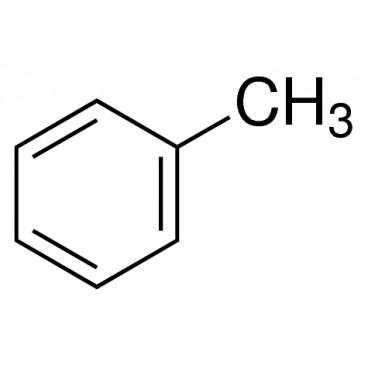 Toluene also known as toluol is a colorless, water-insoluble liquid with the smell associated with paint thinners. It is a mono-substituted benzene derivative, consisting of a CH3 group attached to a phenyl group. As such, its IUPAC systematic name is methylbenzene. It is an aromatic hydrocarbon.

Toluene is widely used as an industrial feedstock and a solvent. In 2013, worldwide sales of toluene amounted to about 24.5 billion US-dollars. As the solvent in some types of paint thinner, contact cement and model airplane glue, toluene is sometimes used as a recreational inhalant and has the potential of causing severe neurological harm Toluene is mainly used as a precursor to benzene via hydrodealkylation.

The second ranked application involves its disproportionation to a mixture of benzene and xylene. When oxidized it yields benzaldehyde and benzoic acid, two important intermediates in chemistry. In addition to the synthesis of benzene and xylene, toluene is a feedstock for toluene diisocyanate (used in the manufacture of polyurethane foam), trinitrotoluene (the explosive, TNT), and a number of synthetic drugs Toluene is a common solvent, e.g. for paints, paint thinners, silicone sealants, many chemical reactants, rubber, printing ink, adhesives (glues), lacquers, leather tanners, and disinfectants.

Toluene can be used as an octane booster in gasoline fuels for internal combustion engines. Toluene at 86% by volume fueled all the turbo Formula One teams in the 1980s, first pioneered by the Honda team. The remaining 14% was a "filler" of n-heptane, to reduce the octane to meet Formula One fuel restrictions. Toluene at 100% can be used as a fuel for both two-stroke and four-stroke engines; however, due to the density of the fuel and other factors, the fuel does not vaporize easily unless preheated to 70 °C (158 °F). Honda solved this problem in their Formula One cars by routing the fuel lines through the exhaust system to heat the fuel.

In the laboratory, toluene is used as a solvent for carbon nanomaterials, including nanotubes and fullerenes, and it can also be used as a fullerene indicator. The color of the toluene solution of C60 is bright purple. Toluene is used as a cement for fine polystyrene kits (by dissolving and then fusing surfaces) as it can be applied very precisely by brush and contains none of the bulk of an adhesive.

Toluene can be used to break open red blood cells in order to extract hemoglobin in biochemistry experiments. Toluene has also been used as a coolant for its good heat transfer capabilities in sodium cold traps used in nuclear reactor system loops.

15 other products in the same category: