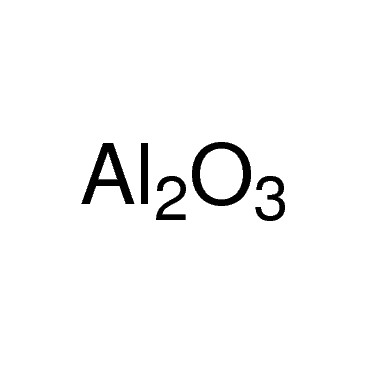 Aluminium oxide (British English) or aluminum oxide (American English) is a chemical compound of aluminium and oxygen with the chemical formula Al2O3. It is the most commonly occurring of several aluminium oxides, and specifically identified as aluminium(III) oxide. It is commonly called alumina, and may also be called aloxide, aloxite, or alundum depending on particular forms or applications. It occurs naturally in its crystalline polymorphic phase α-Al2O3 as the mineral corundum, varieties of which form the precious gemstones ruby and sapphire. Al2O3 is significant in its use to produce aluminium metal, as an abrasive owing to its hardness, and as a refractory material owing to its high melting point.

Over 90% of the aluminium oxide, normally termed Smelter Grade Alumina (SGA), produced is consumed for the production of aluminium, usually by the Hall–Héroult process. The remainder, normally called speciality alumina is used in a wide variety of applications which reflect its inertness, temperature resistance and electrical resistance. Being fairly chemically inert and white, aluminium oxide is a favored filler for plastics. Aluminium oxide is a common ingredient in sunscreen and is sometimes also present in cosmetics such as blush, lipstick, and nail polish. Many formulations of glass have aluminium oxide as an ingredient.

Aluminium oxide catalyses a variety of reactions that are useful industrially. In its largest scale application, aluminium oxide is the catalyst in the Claus process for converting hydrogen sulfide waste gases into elemental sulfur in refineries. It is also useful for dehydration of alcohols to alkenes. Aluminium oxide serves as a catalyst support for many industrial catalysts, such as those used in hydrodesulfurization and some Ziegler-Natta polymerizations.

Aluminium oxide is widely used to remove water from gas streams. Aluminium oxide is used for its hardness and strength. It is widely used as an abrasive, including as a much less expensive substitute for industrial diamond. Many types of sandpaper use aluminium oxide crystals. In addition, its low heat retention and low specific heat make it widely used in grinding operations, particularly cutoff tools. As the powdery abrasive mineral aloxite, it is a major component, along with silica, of the cue tip "chalk" used in billiards. Aluminium oxide powder is used in some CD/DVD polishing and scratch-repair kits. Its polishing qualities are also behind its use in toothpaste. Aluminium oxide flakes are used in paint for reflective decorative effects, such as in the automotive or cosmetic industries.

Aluminium oxide has been used in a few experimental and commercial fiber materials for high-performance applications (e.g., Fiber FP, Nextel 610, Nextel 720). Alumina nanofibers in particular have become a research field of interest. Aluminium oxide can be grown as a coating on aluminium by anodizing or by plasma electrolytic oxidation (see the "Properties" above). Both the hardness and abrasion-resistant characteristics of the coating originate from the high strength of aluminium oxide, yet the porous coating layer produced with conventional direct current anodizing procedures is within a 60-70 Rockwell hardness C range which is comparable only to hardened carbon steel alloys, but considerably inferior to the hardness of natural and synthetic corundum. Instead, with plasma electrolytic oxidation, the coating is porous only on the surface oxide layer while the lower oxide layers are much more compact than with standard DC anodizing procedures and present a higher crystallinity due to the oxide layers being remelted and densified to obtain α-Al2O3 clusters with much higher coating hardness values circa 2000 Vickers hardness.

Alumina is used to manufacture tiles which are attached inside pulverized fuel lines and flue gas ducting on coal fired power stations to protect high wear areas. They are not suitable for areas with high impact forces as these tiles are brittle and susceptible to breakage.