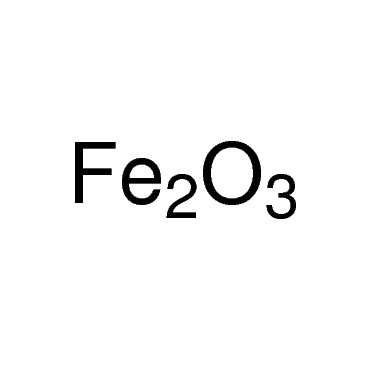 Iron(III) oxide or ferric oxide is the inorganic compound with the formula Fe2O3. It is one of the three main oxides of iron, the other two being iron(II) oxide (FeO), which is rare, and iron(II,III) oxide (Fe3O4), which also occurs naturally as the mineral magnetite. As the mineral known as hematite, Fe2O3 is the main source of iron for the steel industry. Fe2O3 is ferromagnetic, dark red, and readily attacked by acids. Iron(III) oxide is often called rust, and to some extent this label is useful, because rust shares several properties and has a similar composition. To a chemist, rust is considered an ill-defined material, described as hydrated ferric oxide.

The overwhelming application of iron(III) oxide is as the feedstock of the steel and iron industries, e.g. the production of iron, steel, and many alloys.

A very fine powder of ferric oxide is known as "jeweler's rouge", "red rouge", or simply rouge. It is used to put the final polish on metallic jewelry and lenses, and historically as a cosmetic. Rouge cuts more slowly than some modern polishes, such as cerium(IV) oxide, but is still used in optics fabrication and by jewelers for the superior finish it can produce. When polishing gold, the rouge slightly stains the gold, which contributes to the appearance of the finished piece. Rouge is sold as a powder, paste, laced on polishing cloths, or solid bar (with a wax or grease binder). Other polishing compounds are also often called "rouge", even when they do not contain iron oxide. Jewelers remove the residual rouge on jewelry by use of ultrasonic cleaning. Products sold as "stropping compound" are often applied to a leather strop to assist in getting a razor edge on knives, straight razors, or any other edged tool. Iron(III) oxide is also used as a pigment, under names "Pigment Brown 6", "Pigment Brown 7", and "Pigment Red 101". Some of them, e.g. Pigment Red 101 and Pigment Brown 6, are approved by the US Food and Drug Administration (FDA) for use in cosmetics.

Iron oxides are used as pigments in dental composites alongside titanium oxides. Hematite is the characteristic component of the Swedish paint color Falu red. Iron(III) oxide was the most common magnetic particle used in all types of magnetic storage and recording media, including magnetic disks (for data storage) and magnetic tape (used in audio and video recording as well as data storage). Its use in computer disks was superseded by cobalt alloy, enabling thinner magnetic films with higher storage density.

Because its bandgap (1.9-2.2 eV) lies in an intense region of the solar spectrum, α-Fe2O3 has been studied as a photoanode for solar water oxidation. However, its efficacy is limited by a short diffusion length (2-4 nm) of photo-excited charge carriers and subsequent fast recombination, requiring a large overpotential to drive the reaction. Research has been focused on improving the water oxidation performance of Fe2O3 using nanostructuring, surface functionalization, or by employing alternate crystal phases such as β-Fe2O3. A mixture of zinc oxide with about 0.5% iron(III) oxide is called calamine, which is the active ingredient of calamine lotion.