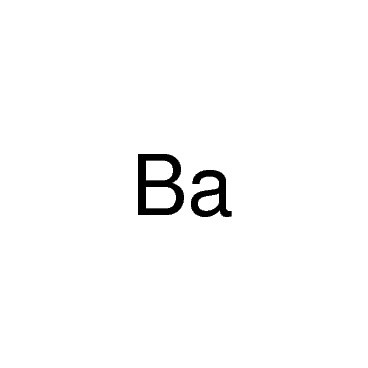 Barium is a chemical element with symbol Ba and atomic number 56. It is the fifth element in group 2 and is a soft, silvery alkaline earth metal. Because of its high chemical reactivity, barium is never found in nature as a free element. Its hydroxide, known in pre-modern history as baryta, does not occur as a mineral, but can be prepared by heating barium carbonate.

The most common naturally occurring minerals of barium are barite (barium sulfate, BaSO4) and witherite (barium carbonate, BaCO3), both insoluble in water. The barium name originates from the alchemical derivative "baryta", from Greek βαρύς (barys), meaning "heavy." Baric is the adjectival form of barium. Barium was identified as a new element in 1774, but not reduced to a metal until 1808 with the advent of electrolysis.

Barium has few industrial applications. Historically, it was used as a getter for vacuum tubes and in oxide form as the emissive coating on indirectly heated cathodes. It is a component of YBCO (high-temperature superconductors) and electroceramics, and is added to steel and cast iron to reduce the size of carbon grains within the microstructure. Barium compounds are added to fireworks to impart a green color. Barium sulfate is used as an insoluble additive to oil well drilling fluid, as well as in a purer form, as X-ray radiocontrast agents for imaging the human gastrointestinal tract. The soluble barium ion and soluble compounds are poisonous, and have been used as rodenticides.

Barium, as a metal or when alloyed with aluminium, is used to remove unwanted gases (gettering) from vacuum tubes, such as TV picture tubes. Barium is suitable for this purpose because of its low vapor pressure and reactivity towards oxygen, nitrogen, carbon dioxide, and water; it can even partly remove noble gases by dissolving them in the crystal lattice. This application is gradually disappearing due to the rising popularity of the tubeless LCD and plasma sets.

Other uses of elemental barium are minor and include an additive to silumin (aluminium–silicon alloys) that refines their structure, as well as

alloy with nickel for spark plugs;

additive to steel and cast iron as an inoculant;