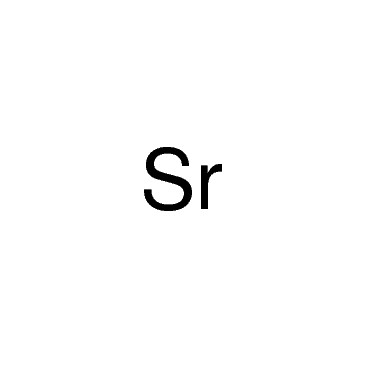 Strontium is the chemical element with symbol Sr and atomic number 38. An alkaline earth metal, strontium is a soft silver-white yellowish metallic element that is highly reactive chemically. The metal forms a dark oxide layer when it is exposed to air. Strontium has physical and chemical properties similar to those of its two vertical neighbors in the periodic table, calcium and barium. It occurs naturally in the minerals celestine, strontianite, and putnisite, and is mined mostly from the first two of these. While natural strontium is stable, the synthetic 90Sr isotope is radioactive and is one of the most dangerous components of nuclear fallout, as strontium is absorbed by the body in a similar manner to calcium. Natural stable strontium, on the other hand, is not hazardous to health.

Consuming 75% of production, the primary use for strontium is in glass for colour television cathode ray tubes, where it prevents X-ray emission. This application for strontium is declining because CRTs are being replaced by other display methods. This decline has a significant influence on the mining and refining of strontium. All parts of the CRT must absorb X-rays. In the neck and the funnel of the tube, lead glass is used for this purpose, but this type of glass shows a browning effect due to the interaction of the X-rays with the glass. Therefore, the front panel is made from a different glass mixture with strontium and barium to absorb the X-rays. The average values for the glass mixture determined for a recycling study in 2005 is 8.5% strontium oxide and 10% barium oxide.

Because strontium is so similar to calcium, it is incorporated in the bone. All four stable isotopes are incorporated, in roughly the same proportions they are found in nature. However, the actual distribution of the isotopes tends to vary greatly from one geographical location to another. Thus, analyzing the bone of an individual can help determine the region it came from. This approach helps to identify the ancient migration patterns and the origin of commingled human remains in battlefield burial sites.

87Sr/86Sr ratios are commonly used to determine the likely provenance areas of sediment in natural systems, especially in marine and fluvial environments. Dasch (1969) showed that surface sediments of Atlantic displayed 87Sr/86Sr ratios that could be regarded as bulk averages of the 87Sr/86Sr ratios of geological terranes from adjacent landmasses.[59] A good example of a fluvial-marine system to which Sr isotope provenance studies have been successfully employed is the River Nile-Mediterranean system. Due to the differing ages of the rocks that constitute the majority of the Blue and White Nile, catchment areas of the changing provenance of sediment reaching the River Nile delta and East Mediterranean Sea can be discerned through strontium isotopic studies. Such changes are climatically controlled in the Late Quaternary.

More recently, 87Sr/86Sr ratios have also been used to determine the source of ancient archaeological materials such as timbers and corn in Chaco Canyon, New Mexico. 87Sr/86Sr ratios in teeth may also be used to track animal migrations